The stories behind the books!

Would like to add a photo but I've run out of webspace.  Maybe later when funds permit.. 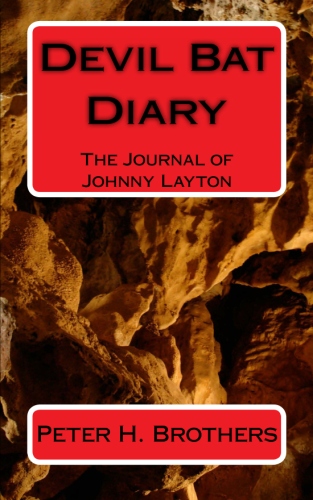 n 1973 I was watching the 1931 Dracula on a bright Saturday morning and was fascinated by actor Bela Lugosi; it was the start of a long adoration of this fascinatingly charismic actor.

It seemed only natural therefore to someday do in my own modest way a tribute to him, and since The Devil Bat is my favorite Lugosi film I thought why not do a different take on it, have some fun and see if whether or not I could write a novel.

In many ways the book was a test to see if I could set a mood, describe characters, create suspense and so forth.  I took a number of liberties with the characters and plot and found the whole experience very enjoyable.  I wrote the book in six months and after another six months of trying to get it published I decided to again self-publish, this time with CreateSpace since my experience with AuthorHouse had been so disastrous.

The book went live in May of 2011 and happily there were none of the problems of the sort I had had with the earlier publsiher plus the royalty terms are more favorable.  As of October 2012 it has sold just over  two-dozen copies.  Shortly after the book was publsihed I was contacted by Lugosi's granddaughter who wanted to know if Lugosi was mentioned in the book; he is, but only in the dedication, although those who have read the book know of course that the character of Dr. Paul Carruthers was portrayed by Bela.

Published in June of 2012, this is the sequel to my earlier "Devil Bat Diary."  In this book Johnny Layton continues his adventures a year and a-half after his Devil Bat escapade.  He and McGuire are unhappily teamed-up again to solve a series of grisly Hollywood agent murders, and along they way they visit many interesting sights and meet many interesting people, and Layton even reconnects with a formerly lost love.

Although still in its very early stages, this is the book that has been by far the most controversial.  Whole friendships have ended because of what some have called the excessive graphic violence, vulgar language and explicit sexual situations.  Signings have been rare and talks even rarer, but I'll keep plugging along! 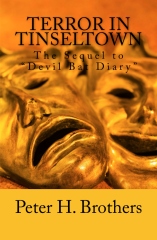 My book on Japanese fantasy film maker Ishiro Honda, published in 2009 by AuthorHouse, is the first and only book on this acclaimed director ever published outside of Japan (it is also the first book in America on the genre first issued in the electronic book format).  It had first been conceived by me back in 1973 when I was writing article for the "Japanese Giants" fanzine, but it wasn't until 30 years later when Brett Homenick introduced me to Brant Elliott that work on the book truly began.

After four years of research and writing and two years of unsucessfully finding a mainstream publisher to print it, I decided to self-publish it.  Due to problems with the publisher's software conversion a number of unfortunate grammatical and spelling errors occured; even so the book has received universal praise and is my proudest accomplishment as a creative artist.  A new expanded and revised edition will hopefully be available by the Fall of 2013.

The title was conceived by a former fellow employee at Progressive Healthcare Systems (now Lakeside) named Ryan Eden, who suggested "Mushroom Clouds and Mushroom People" as a tie-in both to the atomic influence seen in a number of Honda's films as well as a reference to one of his popular films (more accurately known as Matango).  I modified it to "Mushroom Men" to give a more "ba-dum-ba" feel to it.

The book's original working title was "Master of Monsters" but another book about Eiji Tsuburaya written by August Ragone came out during the writing of my book so I had no choice but find another title!

The cover image is actually two found on a public domain pictorial site named "Jupiter Images" and was as close as I could come to finding something that would attract people's attention, a very important factor in choosing a cover illustration.  One of the amusing paradoxes of the book is that despite its title the cover shows neither a mushroom cloud nor mushroom men but a fireball and zombies!

As the book approaches its 3rd anniversary over 500 copies have been sold.  The dedication went to the late Guy Mariner Tucker (whom I never met) who wrote the bible of Japanese Fantasy Films, Age of the Gods, and the late John Rocco Roberto (whom I also never met) who wrote a number of excellent articles on the genre.  I have had the priveldge of giving ten book talks on Honda as well as a number of signings.  The biggest thrill was having these events during his centennial in 2011. 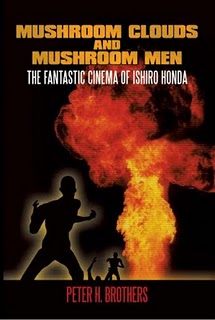